Łeba – one of the most beautiful and most frequently visited places on the Baltic coast. Located in the protection zone of the Słowiński National Park (UNESCO World Biosphere Reserve), which may boast very wide golden sand beaches with wonderful SHIFTING DUNES, which are unique in Europe, as well as Łebsko and Sarbsko Lakes.

A rich offer of tourist attractions, including visiting Łeba and its surroundings, hiking on the golden sand of the beaches and shifting dunes, cycling trips along tourist routes, are the highlights making it worthwhile to stay in Łeba.

The Łeba seashore – the kingdom of golden beaches – is a unique and only such place on the Polish coast, lying in a particularly healthy climate zone. Salt and iodine content in the air, high insolation (45% greater than in Silesia in southern Poland) as well as highly dynamic atmospheric changes (natural inhalator of respiratory tracts) help us improve our disposition and comfort. Increased emissions of healthy salt and iodine compounds, much greater operation of the rays of the sun reflected from the sand, which contains 85% of quartz, positive stimuli resulting also from the peaceful nature of our landscape (according to the climatologist dr K.Rabski).

The curative features of the micro-climate of Łeba cover chronic and recurring disorders of the respiratory system, endocrinal and metabolic systems, as well as locomotion organs and rheumatic symptoms.

According to physicians, the specific micro-climate of Łeba greatly enhances the strengthening of the immune system of the body and is a very special place, with great health and medicinal value. Anyone who has ever visited Łeba just once, is sure to come here again.

Łeba is attractive and beautiful the whole year round.

Słowinski National Park is located between Łeba and Rowy on the Gardeńsko-Łebska Lowland. Its northern limit consists of the Baltic coastline – 32.5 km, followed by the lakes: Łebsko (7140 ha – maximum depth 6.3 m), Gardno (2468 ha and 2.6 m deep), Dołgie Wielkie (146 ha and 2.9 m deep), Dołgie Małe (6.3 ha and maximum depth 1.7 m), as well as adjoining woods and 7 rivers, the largest of which are Łeba and Łupawa. The National Park covers and area of 18247 ha comprising: waters, forests, peat bogs, marshlands, grasslands and a line of sand bar dunes with moving sands. It was established on 1 Janurary 1967. Its name comes from Słowińcy – the Kashubian inhabitants of the banks of Lake Łeba, who populated the area of the National Park in the past. In more distant past the area of the National Park was a sea bay, but due to the operation of the Scandinavian Glacier and the subsequent impact of the Baltic Sea, the chain of morainic hills was formed, the highest one called Rowokół – as the holy mountain of the local Słowińcy and Kashubians from Łeba (115 m above sea level). Rowokół is a beauty spot overlooking the entire National Park.

Between the Baltic Sea and the northern shore of Lake Łebsko the sand deposited by the sea waves on the beach, dried by the sun and the wind, blown away by strong winds further inland, forms very high dunes (30 – 40 m) as a result of this process, with the highest one called Góra Łącka – 42 m above sea level. The largest dune area is on the Mierzeja Łącka sand bar, covering an area of about 500 ha.

The moving sands are displaced by the impact of strong westerly and north-westerly winds at the pace of 3 – 10 m per year. The power of the shifting dunes is enormous, burying everything they encounter on their way. Their power depends on the strength of the wind, the front of the dune, the height and shape of the land. The moving sands form hills of different shapes and sizes creating an incredible, utterly unrealistic landscape. In such unusual terrain, full of sandy heights and valleys, one can see dead pine woods, the remains of trees buried in the sand and vegetation peculiar for this region. On the dunes it is also possible to observe the traces of various insects and wild animals.

Słowiński National Park with its shifting dunes that are unique in Europe, with a wealth of flora and fauna, as well as a specific curative micro climate, was included in the UNESCO World Network of Biosphere Reserves in 1977, whereas in 1995 it was inscribed on the Ramsar Convention List of Wetlands of International Importance for the protection and conservation of global biological diversity. 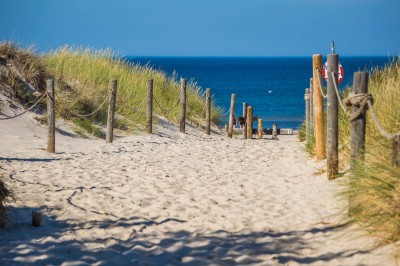